Casting off, in your bareboat, or crewed, charter yacht from the bay of Naples, provides the opportunity for an excellent 1 or two week sailing holiday, in the Tyrrhenian sea : 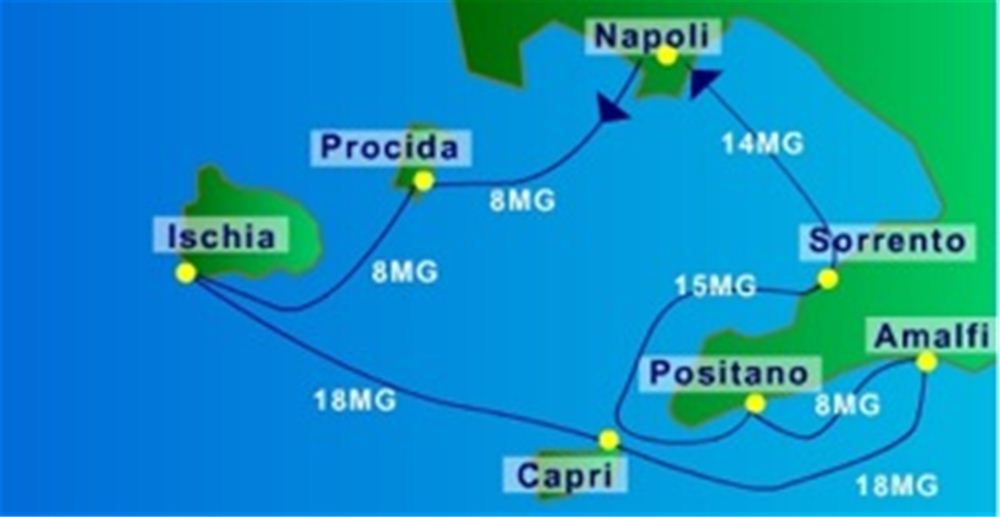 Ischia is the largest island with her 47 square kilometres, the most beautiful and biggest island in the Gulf of Naples, Ischia is one of the most famous seaside and tourist centres of Italy in the world.

The island of Ischia is a well-known tourist centre for four main reasons. Firstly, for its unequalled natural beauty, secondly, for its all-year-round mild climate, thirdly for its thermal water, and lastly for its modern tourist facilities. Everything from the sea to the mountain - including its harbours, the small bays, its convenient beaches and ports, the high rock face along its coast, the vegetation, the variety of the plant life, the pine trees and the myriads of multi-coloured flowers - make Ischia one of the most beautiful islands.

Just off the coast of Naples and Salerno, between Cape Miseno and Amalfi, a great rock soars like a dream lost in the cobalt blue sea that surrounds it. This Mediterranean jewel, yearned for and exalted in some of the world's

The island of Capri, with its intoxicating fragrance of flowers, delicate splashes of colour, recollections of a millennial past and a peaceful charm, shattered only by the shrill cry of seagulls, are just some of the magical qualities of this mythical isle.

Of the islands embellishing the Gulf of Naples, Procida, an isle about four square kilometres large and laid halfway between the extreme projection of the Phlegraean Fields and the isle of Ischia, is the one which has best succeeded in preserving its original, genuine beauty, unpolluted nature and simplicity of life, together with its century-old traditions.

The Amalfi Coast has a mixture of history and nature, all to discover; from the Cathedral of Amalfi, to the villas in Ravello and the numerous churches built during the historical period of Amalfi's Republic. Here you can find distinctive ceramics, limoncello the local lemon liqueur, and the prized mozzarella di bufala. Amalfi itself is a quiet and picturesque seaside resort.

Positano: has been defined as a "vertical village", leaning against a rocky wall, full of charming multicoloured houses.

Sorrento: A famous resort town for the Romans, even then known for its perfumed orange and lemon grows and its magnificent sea-views. A compulsory stop even today for international tourism. 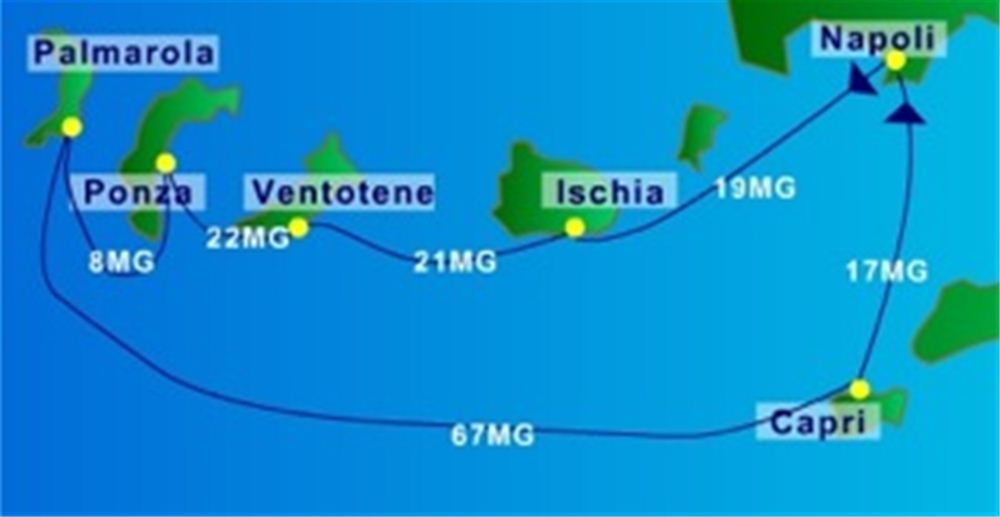 The islands have an eruptive origin and their landscapes are wild with a wonderfull very clear and blue sea. Above all, Ponza and Palmarola islands, with their moon-like shape and their bristling rocks, testify the huge explosions and terrifying eruptions from which they originated.

The arrival in Ponza is really charming: you can admire the semicircle of pink houses on the harbour, the roman "piscine", ancient basins where the Romans bred fish.. The sea is the real jewel of Ponza: its crumbly rocks of tuff and lava, under the blows of the wind and of the waves, have strange shapes in boundless series of capes, promontories, beaches, bays, caves, and one finest than the others. The sea depths are very various and charming: red seaweeds, "poseidonia" that waves in the current like the hair of a swimming "Medusa". It is very amusing to snorkel in a few metres of water:

Zannone Island offers a various set of samples of geological formations that witness a very old earthly history. But the real treasure of the island is its vegetation: here it is the same the first farmers found many thousands years ago. Here you can breathe the perfume of rosemary, lavender, thyme, lentisco, heather. On Zannone Island you can find only the keeper's house and a lighthouse; there are also the ruins of a "benedettino" convent going back the VI century a.C.

Ventotene is an important archaeological place, with its roman harbour, the ancient fish basins and the ruins of "Villa Giulia", imperial palace on "Punta Eolo". Very pretty is the small village, in which in the winter only 500 people live: it was built by the Borboni during the VIII century and their houses have the pink and white colours of the houses built on the islands of the Neapolitan Gulf.
Like the sea of Ponza, the waters of Ventotene are very clear and diving and snorkelling are very good here.

Santo Stefano: is placed far 1600 meters from Ventotene harbour and is a low small island, 80 meters high on the sea level.
Once an ancient prison, the building, built round a circular courtyard, imitates the "gironi" of Dante's hell. The life imprisonment building has being deserted since 1965. On the island you can admire very wild vegetation, where once the prisoners farmed their small fields.

Palmarola is placed six miles far from Ponza. Arriving from Ponza at Palmarola, you can see a wonderful bay, "Cala Brigantina"; on the right a smooth and low rock is dark in front of a very high white rock that is reflected in a jade sea; on the left the "Faraglioni di Mezzogiorno". On the North rock, you can see the ancient caves, prehistoric shelters, of Ponza inhabitants, who came here to farm very small fields.