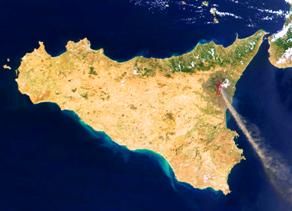 Sicily with 1000km of coastline including offlying islands is the largest island in the Mediterranean. Around it lies a number of smaller islands often the main attraction to those cruising aboard their crewed charter yachts. To the north the stunning volcanic Aeolian islands ( or Eolian ) and Ustica, to the West the Egadi islands and to the south the Pelagie islands and Pantelleria. The coast is mostly rocky in the north and sandy in the south. The landscape is varied with mountains and hills but with an expanse of plains around Catania. The eastern part of the island is dominated by Mount Etna (about 3.330 m seem smoking in the photo left) the whole of which is a protected area within a national park. Still active it is the biggest volcano in Europe.
Along the north coast from east to west lies a stretch oMountains some of their snow capped peaks reaching 2000 m. The area to the West of the river Torto has an irregular lime-stone formations alternating with low rolling hills. Over to the east of the island between Messina and Mount Etna, lies the easternmost tip of the Peloritani chain, very similar to the mountains of Calabria. The Southeast corner comprises a series of high plateaus made up of lava, tuff and above all limestone, and features a number of impressive gorges carved out by water erosion through the centuries.
Sicily's principal cities include the regional capital Palermo, together with the other provincial capitals Catania, Messina, Syracuse (Siracusa in Italian), Trapani, Enna, Caltanissetta, Agrigento, Ragusa. Other well known Sicilian ports include Cefalù, Taormina, Portorosa, Riposto,
Click here to open, in a new window, a map of our Bareboat & Skippered yacht charter bases in Italy & Sicily.
For details of Crewed, Skippered or bareboat Motor Yachts, Catamarans and Sailing Yachts, based in Sicily, please see menu left, or use quick links below
Many more crewed yachts, for cruising this area, would be based on the Italian mainland, so please see our selection listed under YACHT CHARTER ITALY (in the Menu left) as the majority of these yachts will be more than happy to board & cruise in Sicily.
Resources: